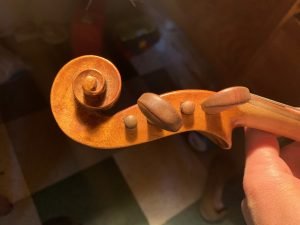 Violins are both tools for making music, as well as relics and legacies of a past time, works of art that mark a moment of mastery from the maker, vessels that hold and embody the creations of the musicians that play them.  They are complex objects, and even complex subjects.  Not to get too philosophical, but I find this aspect of the work as a luthier quite compelling. 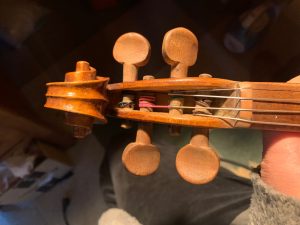 I recently had the opportunity to do work on a violin for a family that I found very sentimental and moving because of the story of the violin and because of how much the owner cherishes the instrument.

This violin was made by C.H. Baker in Tulare, CA in the year  1933.  Charles H. Baker was a modern American  violinmaker, and his work was special because he made all his violins after his retirement from a career in carpentry after he became blind.  The violin belongs now to the maker’s great-niece.  It had been made for and played by her mother, and is a family treasure.  So naturally, I was so pleased to bring this amazing violin back to life and music for the family to enjoy again. 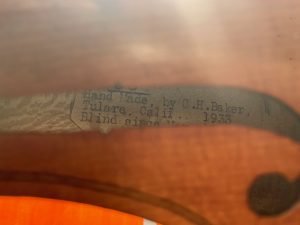 The owner of the violin, Christy Arsenith, kindly wrote to me after the work was completed on the violin.

“We are so thrilled to have had my mother’s violin restored by Rachael of Soroka Violins. It is truly beautiful and the tone is perfect. This violin was made by my mother’s blind great uncle and given to her as a gift in 1933 when she was a child, she went on to play this violin from a young age to adulthood.

Thank you Rachael for restoring this precious instrument
Christy” 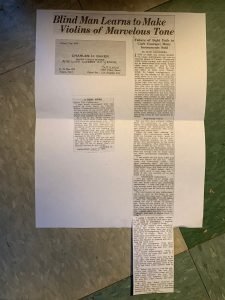 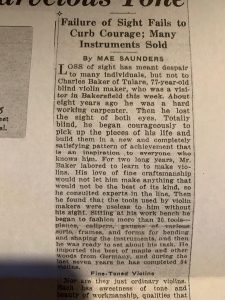 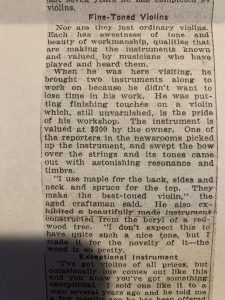 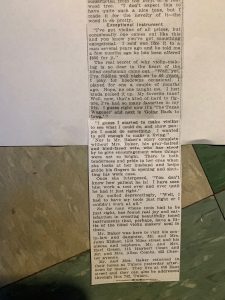 Here is the text of this article:

Failure of Sight Fails to Curb Courage; Many Instruments Sold

By MAE SAUNDERS
LOSS of sight has meant despair to many indfvlduals, but not to Charles Baker of Tulare, 77 year-old blind violin maker, who was a visitor in Bakersfield this week. About eight years ago he was a hard working carpenter. Then he lost the sight of both eyes. Totally blind, he began courageously to pick up the pieces of his life and build them in a new and completely satisfying pattern of achievement that is an inspiration to everyone who knows. For two long years, Mr. Baker labored to learn to make violins. His love of fine craftsmanship would not let him make anything that would not be the best of its kind, so he consulted experts in  the line. Then he found that the tools used by violin makers were useless to him without his sight. Sitting at his workbench he began to fashion more than 20 tools— planes, calipers, guages of various sorts, frames, and forms for bending and shaping the instruments, and then he was ready to set about the task. He imported the best of maple and other woods from Germany, and during the last seven years he has completed 54 violins.
Fine-Toned Violins
Nor are they just ordinary violins. Each has sweetness of tone, and beauty of workmanship, qualities that are making the instruments known and, valued, by musicians who have played and heard them.
When he was visiting he brough two instruments along to work on because he didn’t want to lose time in his work, He vas putting finishing touches on a violin which, still: unvarnished, is the pride of his workshop. The instrument is valued at $200 by the owner. One of the reporters in the newsrooms picked up the Instrument, and swept the bow over the strings and its tones came out with astonishing resonance and timbre.
“I use maple for the: back, sides and neck and spruce for the top. They make the best-toned violin,”  the aged craftsman said. He also exhibited a beautifully made instument constructed from the beryl of a redwood tree. “I don’t expect this to have quite such a nice tone, but I made it for the novelty it—the wood is so pretty.
Exceptional Instrument
“I’ve got violins of all prices, but occasionally one comes out like this and you know you’ve got something exceptional. I sold one like it to a man several years ago and he told me a few months ago he has been offered $600 for it.”
The real secret, of why violin-making is so dear to the heart of the blind craftsman came out. “WelI yes I’ve fiddled well nigh on 60 years. I play for hoedowns occasional, I played for one a couple. of months ago. Nope, no one taught me. just kinda picked it up. My favorite tune? Well, now, that’s kindsf hard to figure, I’ve had so, many favorites in my life. I guess right now It’s ‘The Texas Wagoner’ and next is Going Back to Iowa”
“I guess I started to make violins to see what could do, and show people I could do something, I wanted to sell enough to make: a living.”
‘Nor is Mr. Baker’s story complete without Mrs. Baker, his gray-haired and kind-faced wife, who stood by to give encouragement when thlngs were not so bright. There is both tenderness and pride in her eyes when she looks at her and helps guide his fingers in opening and shutting his work case.
Once she interposed, “You don’t know how patient he is! I have seen him work a tool over and over until he had it just right.”
He smiled deprecatingly, ‘*Well, I had to have my tools just right or I couldn’t work at all.”
So the man whose tools had to be just right has found real joy and satisfaction in creating beautifully toned instruments that, perhaps, have a Itttle of the blind violin makers’ soul In them.
Mr. Baker was mere to visit his son-In-law and daughter, Mr. and Mrs. John Kidner, 1519 Niles street and his nieces and nephews, Mr. and Mrs. Earl Green, 115 Haybert Court and
Mr. and Mrs. Allan Combs, 422 Chester avenue.
Mr. and Mrs. Baker returned to their home at Tulare yesterday afternoon by motor. They live at 630 East Street and they can be addressed through Box 782, Tulare.

You can find more information about Mr Baker here: http://www.tularehistoricalmuseum.org/charles.html